Top surgery is a broad term used to describe different types of procedures for patients who experience gender dysphoria or gender incongruence and wish to either feminize their chest (e.g., breast augmentation or fat transfer) or masculinize their chest (e.g., mastectomy).  Whether the transition is from male to female (MTF), female to male (FTM), or non-binary (N), the surgical technique is always individualized to meet your personal aesthetic goals.  At the time of your consultation, Eric Li, MD, and the team at CA Aesthetics in Los Gatos and San Jose, California will analyze your chest in detail and discuss the techniques which are best suited for you.

Various techniques can be used to masculinize the chest. Ultimately, the goal is to remove breast tissues and flatten the chest. The technique that is best suited for you depends on the amount of breast tissue that you have and the condition of your skin.

When the chest fullness is minimal and there is also minimal stretching of the skin, liposuction can be used to flatten the chest. Dr. Li also sometimes advises Renuvion to help tighten the skin post-liposuction. However, liposuction by itself is rarely the best treatment option because most patients do not meet the above criteria and/or there is sometimes glandular breast tissue underneath the nipple-areolar complex that cannot be liposuctioned and needs to be surgically removed. If tissue needs to be removed to flatten the chest, then a peri-areolar or keyhole incision tissue can be made at the bottom of your areola. The scar associated with this incision hides very well once healed.

For most patients, there will either be moderate to significant fullness involving their chest with excess or stretched out skin. As such, the double incision technique is most suitable to flatten the chest. This technique is by far the most common technique among surgeons who performed transgender top surgery. In the standard technique, a crescent pattern is designed at the bottom of the breast to remove a large segment of skin and tissue (see diagram). The nipple-areolar complex is also removed completely from your chest, and placed back later as a graft. The result after surgery are horizontal scars that span across the lower chest, and circular scars where the nipple-areolar complexes were grafted back. By in large, the double incision technique provides the greatest ability to flatten and tighten the chest and re-position and re-size the nipple-areolar complexes.

WHAT DOES DR. LI DO DIFFERENTLY?

Even though the double incision technique is the most common technique among surgeons who perform transgender top surgery, Dr. Li performs two different versions of this technique which improves his results even further compared to the traditional technique.

In Dr. Li’s preferred and unique muscle border double incision technique, a L-shaped pattern is designed, following the border of the pectoralis muscle (see diagram). The pectoralis muscle is a large broad muscle that is responsible for a significant part of the muscle definition involving the upper chest. The result after surgery are L-shaped scars that outline the border of the paired muscles on each side. The advantage of this technique is that the final scars in many ways highlight the muscles and becomes even better with more muscle growth after surgery. Dr. Li also prefers the scarring created by his muscle border double incision technique over the traditional double incision technique, in which scars usually extend far onto the lateral chest and/or can create soft tissue prominences called “dog ears”. By angling the scar upward and lateral, Dr. Li’s technique does not create any “dog ears”. In Dr. Li’s muscle border double incision technique, the nipple-areolar complex is also completely removed from the chest and placed back later as a graft. However, because the chest appears different when a patient is lying down with their arms stretched out (e.g., during surgery) versus when they are upright with their arms to the sides, Dr. Li takes the extra step during surgery to re-position the patient into a normal position to decide the new location of the nipple-areolar complexes. In inexperienced hands, the nipple-areolar complex can be positioned too medial or central and/or created too large on the chest, which creates an odd appearance to the result.

WHAT IS INVOLVED IN NIPPLE-AREOLAR COMPLEX GRAFTING?

In nipple-areolar complex (NAC) grafting, a circular incision is made around the existing NAC, and then it is carefully removed from the chest. The NAC that is removed can be smaller and more circular than the original. When all wounds are closed after completion of the double incision mastectomy, the patient is that sat up on the operating room table to determine the best location for the new NAC. A matching piece of skin is then removed from the chest, and the NAC is sutured to its new location.

Because the NAC is completely removed, both blood vessel and nerve endings are also fully detached. However, over time, new blood vessels and nerve endings from the chest grow into the NAC, in a process that takes approximately 2-3 weeks for partial healing, and 6-8 weeks for more complete healing. A special compression dressing is applied over the chest to help the graft heal. Even after 8 weeks, the NAC will continue to change, with fading of the scars and return of normal pigmentation.

WHY IS NIPPLE-AREOLAR COMPLEX GRAFTING NECESSARY?

Often, pre-existing nipple-areolar complexes (NACs) are larger and lower on the chest. Removing the NAC and placing it back as a graft is often the most effective technique of re-sizing and re-locating so that it has a more masculine appearance. Also, if the NAC is not removed as a graft, more tissue directly underneath it may have to be preserved and this may result in excess and undesired fullness and bulk.

HOW DO I KNOW WHICH TECHNIQUE IS BEST FOR ME?

The best way to arrive at this conclusion is to have a consultation with Dr. Li. At the time of your consultation, Dr. Li will analyze your chest in detail and discuss the techniques which are best suited for your personal goals. However, a helpful way to consider where your anatomy stands is to consider the lower pole arc of your breast. The lower pole arc is the distance between the nipple and the bottom of your breast. Generally, if this distance is short, this usually means you have less skin excess, less breast tissue, and less droopiness as well. These anatomic features may make it possible for you to have liposuction or peri-areolar or keyhole techniques to masculinize your chest. On the other hand, a longer lower pole arc distance usually means that you have more skin excess, more breast tissue, and more droopiness, which usually requires double incision type techniques. While minimizing scarring is always of utmost concern, attempting to use peri-areolar or keyhole techniques when double incision type techniques should be used instead will often lead to irregular bulges of excess skin, inadequate flattening of the chest, and greater likelihood of dissatisfaction with the surgical result. 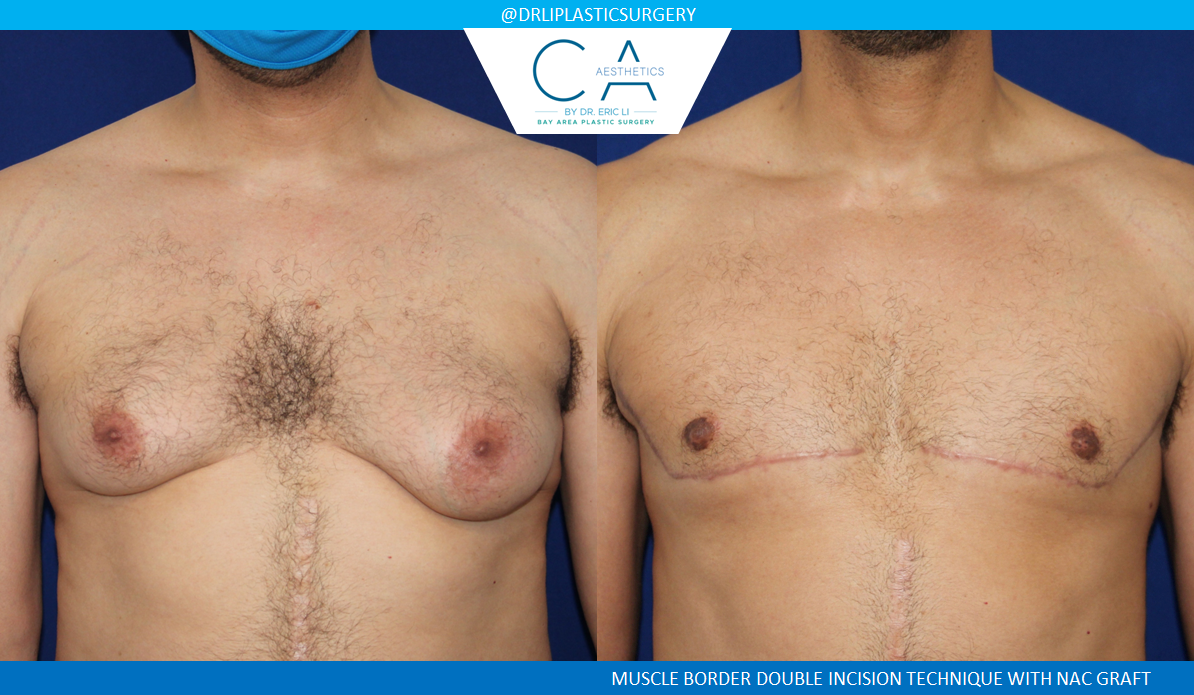 Various techniques can be used to feminize the chest. Ultimately, the goal is to add tissue, projection, and shape to the chest. The technique that is best suited for you depends on your goals.

Often, patients who are already taking hormone therapy develop softening of their skin and some breast growth. This may lead to development of enough breast shape such that fat transfer or grafting is all that is desired. In this technique, fat is liposuctioned from different areas of your body, processed, and then injected into your chest. Dr. Li prefers to process his fat using the PureGraft® system to have the highest quality fat for injection. The higher the quality of the fat, the greater the likelihood of its survival. The technique of injecting the fat also influences the fat survival and Dr. Li has significant experience with fat transfer to the face, breasts, and buttocks. After the fat is injected, it eventually becomes a part of your chest, such that if you lose weight, the fat will get smaller, but on the other hand, if you gain weight, the fat will get larger. The liposuction performed to retrieve the fat can also help feminize the torso. Lastly, fat transfer or grafting can be combined with breast augmentation with saline or silicone implants to further improve results, e.g., it can be used to target certain areas like the upper half and medial half of the breasts to make it fuller. This is especially helpful in patients who are thinner as fat transfer can make results appear more natural and minimize visibility or palpability of implants.

The limitations of fat transfer or grafting are that you may not always have enough fat to liposuction, and there is a limit to which fat can increase the size and projection of your breasts. This limit is determined by the current volume of your tissues and the tightness of your skin, and generally you can expect the breasts to increase 1 cup size with each surgery. Notably, the skin can sometimes be tighter and stiffer in patients hoping to have MTF top surgery. If larger increases in volume and projection are desired, breast augmentation with saline or silicone implants may be a better option.

The techniques used to place breast implants for transgender patients are the same as those used for cisgender patients, with several nuances to consider. Different incisions can be used to access the chest tissues, including transaxillary, peri-areolar, or inframammary incisions, through which either subglandular/prepectoral or submuscular/subpectoral pockets are created for the implants. Both saline and silicone implants can be placed, although Dr. Li prefers the latter because they are lighter for the same volume and have a more natural feel. To read more about breast augmentation, click this link (https://www.caaesthetics.com/contents/for-her/breast-surgery/breast-augmentation1).

As aforementioned, patients hoping to have MTF top surgery can sometimes have stiffer and tighter skin, and so there may be greater benefit in placing implants in a subglandular/prepectoral pocket to allow maximum stretch and shaping of the skin by the implants. It may also be helpful to use higher profile implant styles as well as more filled implants such as the newer Mentor Xtra or Boost implants to help shape the breasts. If the skin is very tight, it may be necessary to progressively create larger breasts through multiple or staged procedures with gradually larger implants or use special implants called tissue expanders to stretch the skin in a controlled fashion over time. 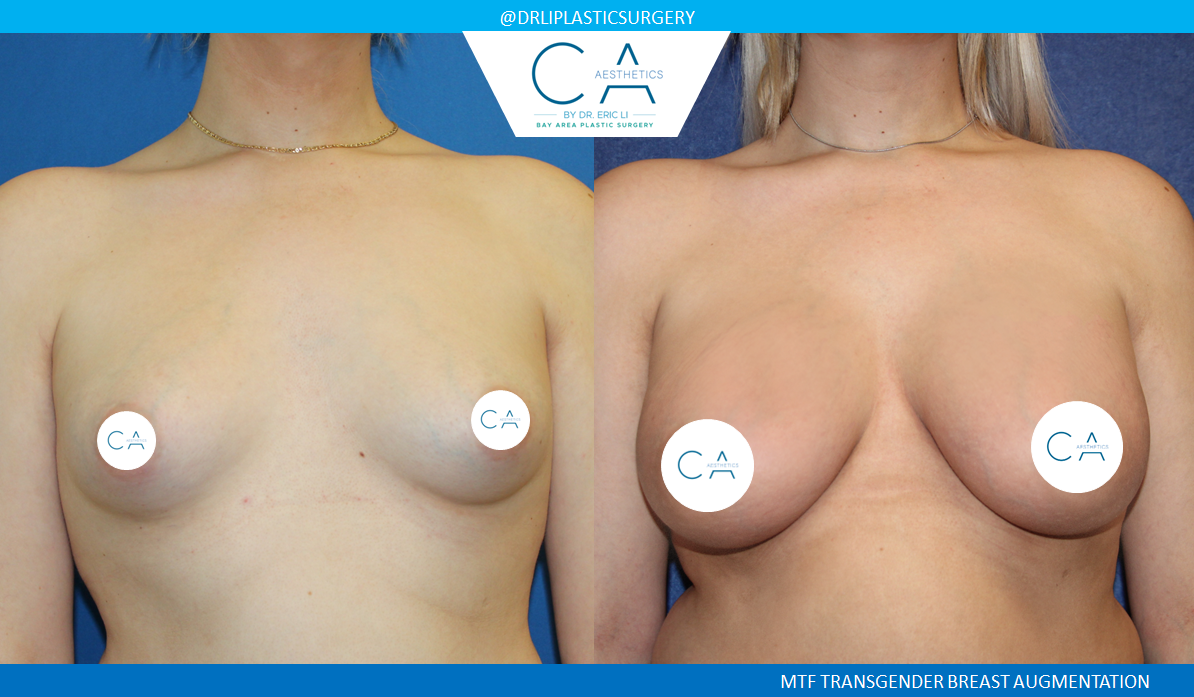